Hundreds of JA alumni from our broad and diverse network have gathered in Vienna for the 2019 JA Global Alumni Conference. From August 28 through September 1, they will network, workshop, and participate in inspiring sessions with top speakers, all focusing on innovation and creativity, communication, and risk-taking.

While this is the sixteenth year of the JA Europe alumni conference, it is the first-ever global conference. JA Alumni Europe and its member nations have organized annual JA alumni conferences every year since 2004. 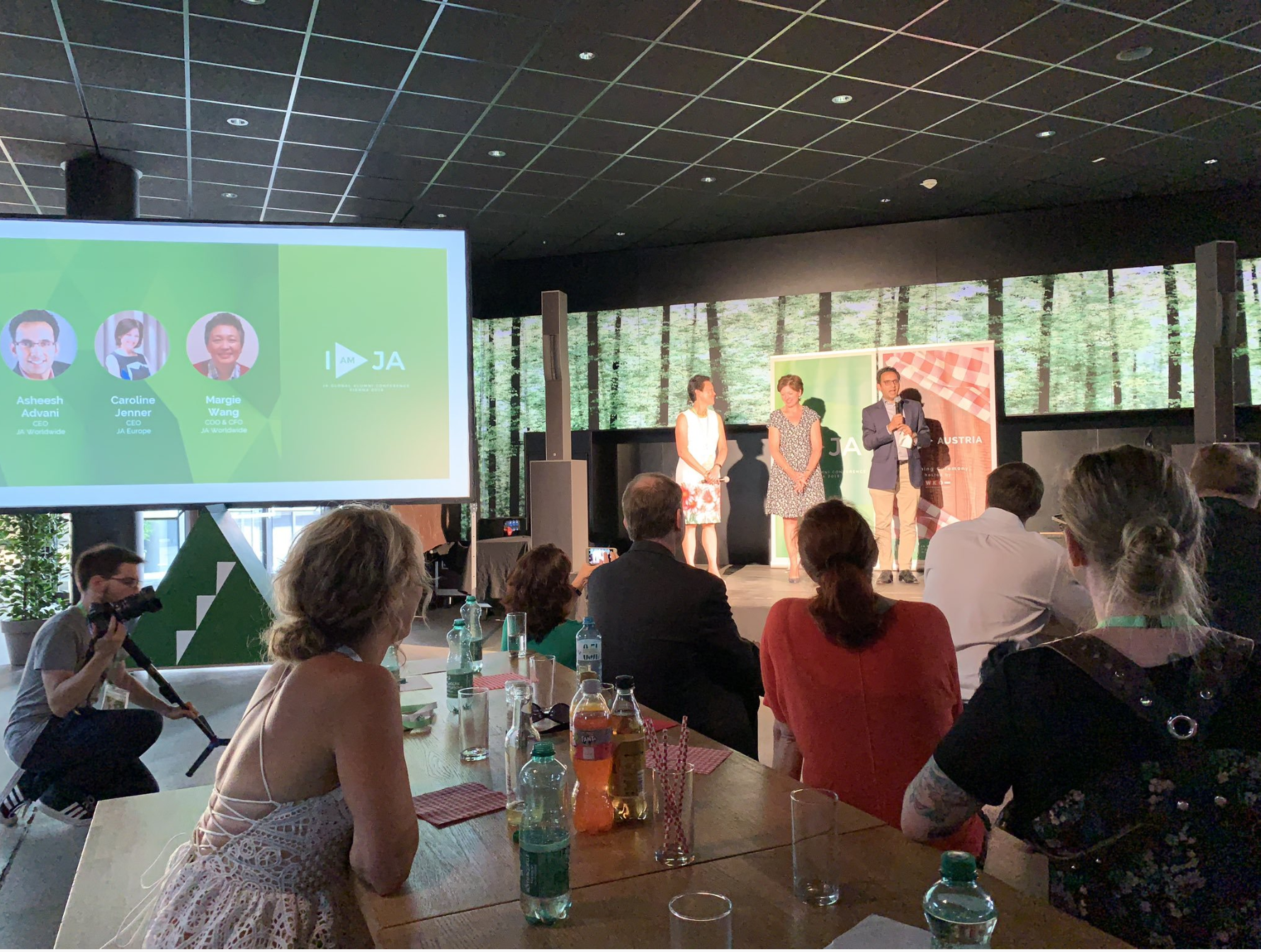 Conference events over the next three days will take place at Vienna University of Economics and Science, and all other activities will take place within the JA Village. The venues, restaurants, and hotel—all part of the JA Village—are within five minutes’ walking distance of each other and of the GATHER GARDEN, many cafes, sporting fields, amusement park attractions, and clubs. Everything is also connected by a mini railway.

JA alumni began arriving from all over the world on August 27 and 28. In addition to traditional social media platforms, they shared photos and stories using the Attendify app, which includes not only a social stream where attendees can share status updates and pose questions to the community, but also a map of JA Village, detailed biographies of speakers and special guests, the conference agenda, restaurant and entertainment recommendations in Vienna, descriptions of sponsors, videos, and additional information about the conference.

Day 1 wrapped up with a traditional Austrian dinner and celebration of Austrian culture, followed by networking with beverages and live music in the GATHER GARDEN.

Day 2 kicked off with a speech from JA Honoris Katharina Krenn of Austria, followed by a keynote from Florian Gschwandtner, co-founder of Runtastic. Next, attendees heard a keynote speech from international leadership coach and founder/CEO of ReloPilot Petra Botekova.

Next, conference participants were treated to two startup pitches—the first from Lorenz Schimik, co-founder and CTO of learning app Mimo, and the second from Bernadette Frech, CEO of the online counseling support service Instahelp. The session closed out with a panel discussion with the morning’s speakers, as well as Brad Geddes, President and CEO of Zucora Home, who uttered the line everyone was talking about after, “Leaders focus on people; managers focus on projects.”

After lunch, attendees participated in master classes with topics such as “The Art of Pitching,” “How to Approach Investors,” “Collaborating for Social Impact,” “Artificial Intelligence & Entrepreneurship,” “The Do’s and Don’ts of Startup Ideas,” and more. With eleven options available, it would be hard to select only one, so the same slate of master classes was offered again after a mid-afternoon coffee break.

The day wrapped up with the FERD’s LIST Ceremony celebrating the eleven 2019 honorees. Norwegian Ambassador to Austria Kjersti E. Andersen and JA Europe CEO Caroline Jenner provided the opening remarks. FERD Chairman Johan Andresen led the main celebration, a presentation and discussion with all honorees. Andresen also dropped a fun fact for attendees: ferd is a Norwegian word for “a journey without an end.” A very appropriate name for the investment firm and a great metaphor for the business world at large. Jenner and Andresen led a conversation about innovation, entrepreneurship, and personal involvement, followed by a reflection panel with Tjeerd Bosklopper, CTO of NN Group, Michel De Wolf, JA alumni and Honorary Dean of the Louvain School of Management, and Milica Markovic, CEO of JA Austria. JA Worldwide President and CEO Asheesh Advani capped off the ceremony with closing remarks on JA’s 100 years.

The day once again ended with a dinner for conference attendees at Viennese restaurant Luftburg, followed by networking and a conference group photo at the GATHER GARDEN.

It was another jam-packed day at the 2019 JA Global Alumni Conference. Attendees had several paths available: they could attend one of two day-long company visits to Gösser brewery and Magna Steyr Fahrzeugtechnik, or they could stay on campus at JA University watching exciting, inspirational speeches and panels.

Attendees who opted for company visits traveled either to an auto manufacturing plant or a traditional Austrian brewery. Magna Steyr Fahrzeugtechnik, located two hours from Vienna by road, which produces Mercedes G-Class, 5er BMW & Z4, Toyota Supra, and Jaguar E- and I-Pace vehicles. Gösser, established in 1860, is one of the most innovative breweries in the world and one of the first self-sustaining, carbon-neutral breweries.

Back at JA University, the day started with an inspirational speech from JA alumna Elena Tosheva, brand marketing manager for Google Europe. Next, Richa Menke of Eight, Inc. gave the first keynote of the day. Then Shaun Frankson of Plastic Bank took the stage for a keynote speech, followed by an inspirational talk from Avanade.

In the afternoon, attendees visited Austrian algae-production company Ecoduna, participated in a case study with global consultancy Roland Berger, and learned about the Austrian startup culture in Startup Races with weXelerate and Talent Garden.

After dinner, conference attendees headed over the PITCH CIRCUS next to the famous Vienna Ferris wheel to network and listen to fellow alumni pitch business ideas at the open mic.

The fourth and final day of the 2019 JA Global Alumni Conference kicked off with an inspirational speech from JA alumna and engineering manager Louise Edwards.

This was followed by emotional and inspiring presentations from Cameron Sinclair and Anna Ruch. Cameron shared the risks he took while pioneering socially responsible architecture. Formerly head of social innovation at Airbnb, he is currently executive director of Armory of Harmony, which repurposes decommissioned weapons into musical instruments. Anna Ruch, who served on the Obama White House photo staff under Pete Sousa, and then went to work for Instagram, shared the risks she has taken capturing daily life in Baghdad.

JA Worldwide President and CEO Asheesh Advani interviewed the Gowri Ishwaran, Vice Chair of tGELF (JA India), internationally recognized educator, and winner of the Padma Award, one of the highest civilian awards in India. They discussed the risks Gowri wished she had taken when she was younger, and how she learned to leave behind the safe life and build the one she wanted. The young crowd gave Gowri a standing ovation.

After spending free time in Vienna, attendees changed into gowns and suits for the gala

JA Alumni Honoris—a group of JA Europe Alumni who are well established in their careers—announced a donation of 50,000 Euros to the JA Worldwide endowment! The endowment serves as a long-term investment in the organization that, as it grows, will use the interest earned to support JA’s operations.

Finally, Sarah Rapp, JA Alumni Community Manager at JA Worldwide, announced Gather 2.0, a major overhaul of the existing Gather community﻿ that will include all the options and amenities requested by alumni and JA member countries over the year since Gather launched. Implementation is planned in the next six months.

With that, the first-ever JA Global Alumni Conference came to a close, and we’re excited to make this a biennial event. Special thanks to Austria JA alumni team, who put the conference together on an entirely volunteer basis. Alumni associations all over the world will have the chance to bid on where the next location will be in 2021. And, if you haven’t already joined us on Gather, we can’t wait to see you there.

Announcing the Winners of the JA Alumni Accelerator Award!

Or
If you have linked your account to one of the following social networks, please click on the relevant icon to log in
Not a member yet?
Register now